Created for millionaires Stephen and Virginia Courtauld, Eltham Palace is part showpiece of Art Deco design and 1930s cutting-edge technology, and part medieval royal palace. Bring your family and make yourself at home, try on clothes, play games and listen to music, as a guest of the Courtaulds. Explore the 19 acres of award-winning gardens.

History of Eltham Palace and Gardens

Eltham is a unique marriage between a Tudor palace and a 1930s millionaire’s mansion. From the 14th to the 16th century it was an important royal palace, where monarchs often stayed and hunted in the surrounding parks. After centuries of neglect, Eltham was leased to Stephen and Virginia Courtauld in 1933, who built an up-to-the-minute house here that incorporated the great hall. The result was a masterpiece of 20th-century design.

Henry VIII passed much of his boyhood at Eltham, and was the last monarch to spend substantial amounts of money or time there.

In July 1517 a tiltyard was laid out to the east of the palace and by the 1520s extensive works were under way including new royal lodgings and a brick-built chapel.

On Christmas Eve 1515 Cardinal Wolsey took the oath of office of lord chancellor there.

In 1525 he drew up the Ordinances of Eltham, regulations designed to reduce waste in the royal household.

The fact that they were ratified at Eltham indicates the palace’s continuing importance. 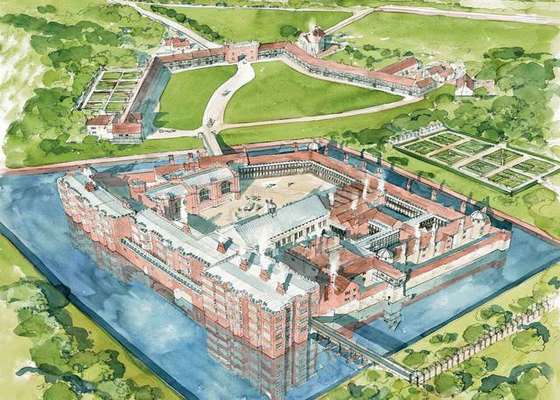 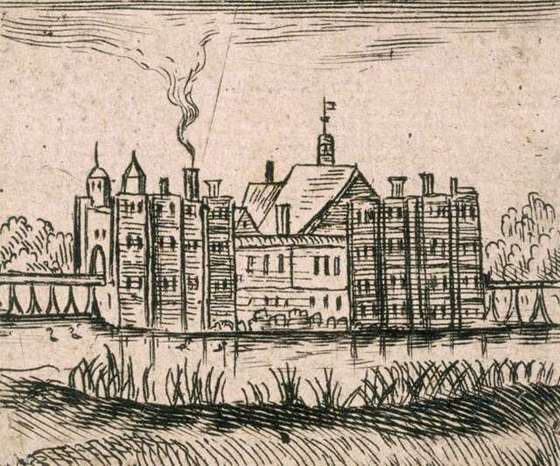 Elizabeth I and the Early Stuarts

In the 1530s, however, Henry VIII rarely came to Eltham. He increasingly embellished Hampton Court, as the focus of the royal court moved westwards. He also preferred Greenwich, which was more accessible from Westminster by river. Elizabeth I (r.1558–1603) only visited Eltham occasionally.

During the 17th century the buildings were poorly maintained. James I (r.1603–25) found the palace ‘farre in decay’, and Charles I was the last king to visit it. In 1651 Parliament sold it to Colonel Nathaniel Rich, who demolished many buildings and stripped the lead off the great hall roof.

When the diarist John Evelyn visited Eltham in 1656 he lamented: ‘Both the palace and chapel [are] in miserable ruins, the noble wood and park destroyed by Rich the Rebel’.

Over the next two centuries Eltham Palace was used as a farm and the buildings were tenanted. Towards the end of the 18th century the palace appears as a romantic feature in paintings and engravings by artists such as Turner, Girtin and Sandby.

In the early 19th century a substantial villa was built beside the north bridge, and gardens and kitchen gardens were laid out in the west and south moats. A campaign to save the great hall from demolition resulted in repairs in 1828 – with the main roof being shored up with props that remained in place until 1903. It was still used as a barn, however.

Another gentleman’s residence, Eltham Court, was built beside the great hall in 1859, incorporating parts of an earlier farmhouse. Glasshouses and gardens were laid out around the house and in the moat. The great hall was used as an indoor tennis court by the tenants of Eltham Court, and as an occasional venue for parties.

From the 1890s more repairs were made to the great hall, most extensively between 1911 and 1914 when the roof was dismantled, reassembled with steel braces and reroofed with tiles, under the direction of the Office of Works. In 1933, millionaires Stephen and Virginia Courtauld were looking for a semi-rural property within easy reach of central London. Eltham fitted the bill, and they took a 99-year lease from the Crown.

They commissioned the budding architects Seely & Paget to design a modern home on the site of the 19th-century buildings, while retaining as much as possible of the historic palace. After some controversy over the scheme, because of its impact on the palace remains, it was eventually carried through with the help of Sir Charles Peers, formerly Chief Inspector of Ancient Monuments with the Office of Works, who acted as consultant for the repairs to the great hall.

The exterior of the new house, in a ‘Wrenaissance’ style partly inspired by Hampton Court, is designed to complement the great hall. The interior styles (ranging from historical to moderne) resulted both from the Courtaulds’ own tastes and from the architects, designers and craftsmen they commissioned.

The Courtaulds also took full advantage of new technology. There were electric fires and in most rooms synchronous clocks which were regulated by the incoming mains supply, and a loudspeaker system that could broadcast records to rooms on the ground floor. Siemens installed a private internal telephone exchange. There was a centralised vacuum cleaner in the basement. Gas was used to power underfloor and radiant ceiling heating throughout the house. Virginia Courtald’s pet lemur even had its own heated quarters on the first floor.

Keen horticulturalists, the Courtaulds also created a variety of garden features including a rock garden, formal rose gardens and a series of garden ‘rooms’, the latter being more typical of the Edwardian period or Arts and Crafts style. Stephen and Virginia Courtauld remained at Eltham for most of the Second World War, retreating during air raids to the basement, which they had fitted out as a comfortable bomb shelter. The most valuable contents of the house were dispersed for safety. Four incendiary bombs severely damaged the east end of the great hall roof in September 1940 and bombs also damaged the glasshouses.

The Courtaulds continued to entertain – though on a reduced scale – at Eltham during the war, but eventually, in May 1944, they moved out, having reputedly become tired of the bombing. Army education units then occupied the site, staying until 1992.

The Ministry of Works took over the maintenance of the palace remains and the great hall, which was repaired and opened to the public for three days a week. The emphasis was on the medieval work at the expense of the 1930s intervention, which had some unfortunate consequences, such as the destruction of the gondola-style Courtauld lanterns in the great hall.

Discover new rooms at Eltham Palace now open to the public for the very first time. Explore the map room where the globetrotting Stephen and Virginia planned their exotic world travels.

Step into a reconstruction of Virginia’s walk-in wardrobe to see beautiful period dresses, hats and accessories, and try on some vintage-inspired replicas yourself.

Go down to the basement with its billiard room and original mural, photographic darkroom and wartime basement bunker. This provided a level of comfort during the Blitz that few ordinary citizens, taking refuge in tube stations or Anderson shelters, could have imagined. 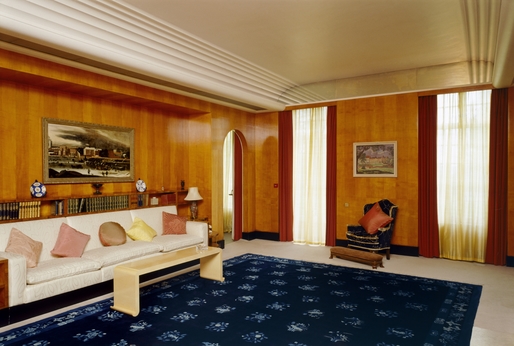 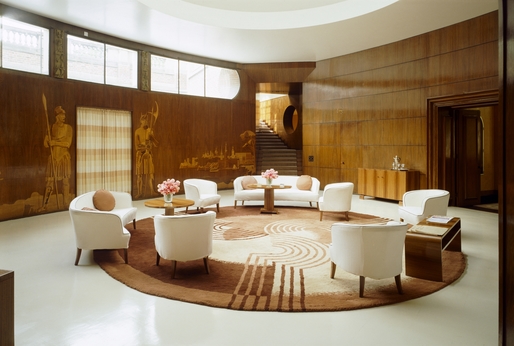 Socialites and politicians, royals and artists all enjoyed hospitality here. This eye-catching room is a mix of Art Deco and cutting-edge Swedish design. Saved from decline by the Courtaulds’, their lavish home is one of the finest examples of Art Deco architecture and design surviving in Britain today.

Explore some of the collection highlights that you can see at Eltham Palace. The marvellous panelled dining room and luxurious golden bathroom are just two of the other highlights you can enjoy.

Take just a few steps and travel back in time from Art Deco modernity to a medieval masterpiece. Gaze out from the minstrels’ gallery across the magnificent great hall, and admire the glorious hammer-beam roof built for Edward IV five hundred years ago.

First recorded in the Domesday book, Eltham estate was presented to King Edward II in 1305. It developed into one of the most favoured royal palace with 1,000 acres of deer park on its doorstep.

Henry VIII spent many childhood years here, but his daughter Elizabeth I preferred the location at Greenwich, and Eltham Palace slowly fell into decline. 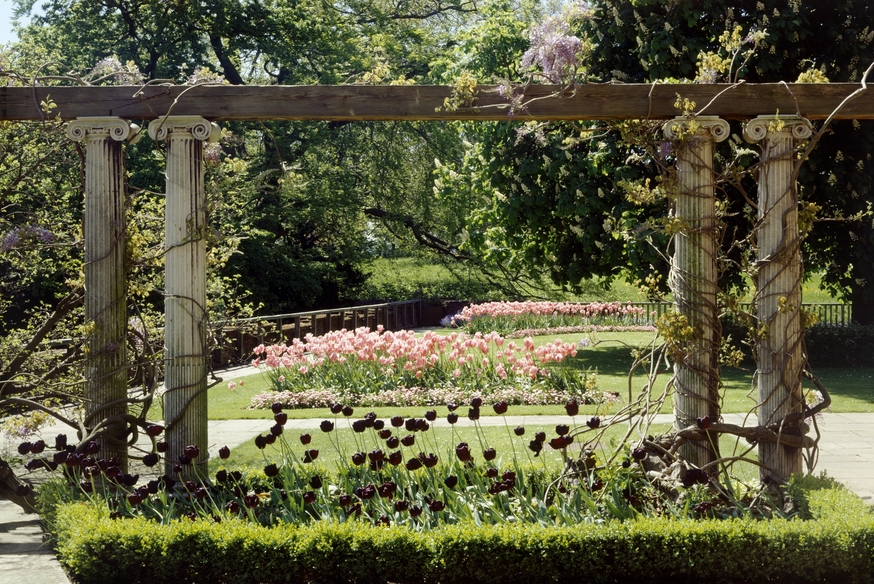 Take time to wander around the Rock Garden with its series of pools and cascades running down to the moat. Cross the moat on London’s oldest working bridge, and smell the roses in the sunken rose garden.

Virginia had a passion for roses, and even had a red rose named after her. Stephen was also a keen gardener and won several Royal Horticultural prizes for the orchids he grew in the glasshouses at Eltham. Find out what you can enjoy in the garden whichever season you visit.

Prices and Opening Times for Eltham Palace and Gardens