Warning: Parameter 2 to qtranxf_postsFilter() expected to be a reference, value given in /var/www/vhosts/english-heritage.cn/httpdocs/wp-includes/class-wp-hook.php on line 298
 English Heritage China Homepage | English Heritage 英国遗产
Menu

Back to Places to Visit

PLAN A FAMILY DAY OUT BY THE COAST
FAMILY GUIDE

EXPLORE THE RUINS OF THIS HISTORIC CASTLE PLAN YOUR VISIT

Immerse yourself in history, myths and stunning scenery at Tintagel Castle, set high on Cornwall’s rugged north coast between Padstow and Bude.  Inextricably linked with the legend of King Arthur, for centuries this dramatic castle and coastline has fired the imaginations of writers, artists and even the brother of a king. Now it’s your turn to be inspired.

Built half on the mainland and half on a jagged headland projecting into the Cornish sea, Tintagel Castle is one of the most spectacular historic sites in Britain. Its association with King Arthur makes it also one of the most famous.
But the history of this enigmatic place stretches back centuries before the first tales of the legendary king shrouded it in the mists of romance.

History and legend are inseparable at Tintagel. During the so-called Dark Ages (about the 5th to the 7th centuries AD) it was an important stronghold, and probably a residence of rulers of Cornwall. Many fragments of luxury pottery imported from the Mediterranean were left behind by those who lived here.

It was probably memories of this seat of Cornish kings that inspired the 12th-century writer Geoffrey of Monmouth to name it in his History of the Kings of Britain as the place where King Arthur was conceived, with the help of Merlin. At the same time, Cornish and Breton writers linked the love story of Tristan and Iseult with Tintagel.

In turn, these associations with legend led the hugely rich and ambitious Richard, Earl of Cornwall, to build a castle here in the 1230s. The site was of no military value – legend alone seems to have inspired him to build here. And long after the castle had fallen into decay, its mythical associations kept interest in Tintagel alive. Start your exploration of the site at the exhibition which looks Tintagel’s rich and varied past.

See artefacts discovered at the site, on display for the first time, as well beautiful book sculptures which illustrate the castle’s literary links. An innovative 3D model of the headland provides a fascinating demonstration of how the site has developed through time. 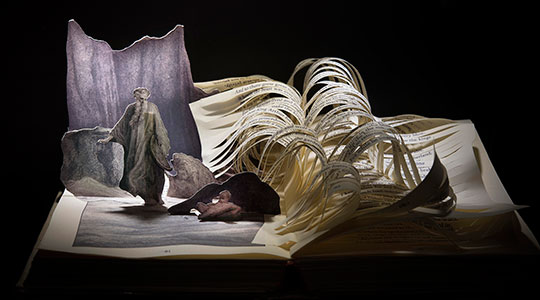 Our new outdoor interpretation takes you on a journey of discovery. Explore the history of the castle and the role that legends have played in shaping the site. A series of panels reveal 1500 years of Tintagel’s past – from a royal stronghold, to thriving trading port, to a castle of romantic stories.

A stone compass points to places connected with the tales of King Arthur and children will love the story stones around the medieval garden ruins. Search for Merlin’s face hidden in the rocks on the beach. On the island, look for the bronze sculpture inspired by the legend of King Arthur and the historic royal figures associated with Tintagel.

Climb the 148 steps on to the island and pass through the wooden door into what was the Great Hall built by Richard, Earl of Cornwall. Walk beyond this Inner Ward area to discover the low stone walls of the Dark Age settlement.

Soak up the natural beauty of this dramatic headland. Circle the island paths to take in a series of amazing views along the rocky coast, or just sit back and enjoy the calm tranquillity. 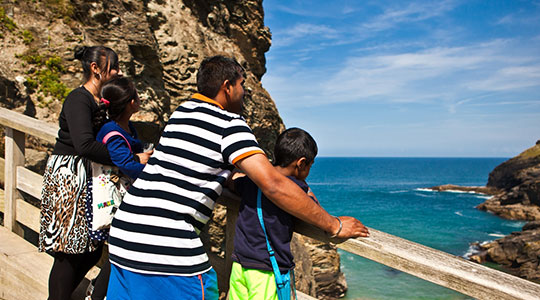 Discover the legend of King Arthur in the dramatic and romantic setting of Tintagel. This iconic hero was first linked to Tintagel in the 12th century, when it was named by Geoffrey of Monmouth as the place where Arthur was conceived.

From Geoffrey’s medieval history of kings, to the poetry of Alfred, Lord Tennyson, the allure of Arthur has continued to captivate us. Find out why for yourself when you visit this special place.

Explore the remains of the Dark Age settlement where Cornish rulers lived and traded with far off shores, importing exotic goods and trading tin.

You can see the deep defensive ditch which protected the settlement as you pass through the entrance into the castle. Imagine what life was like at Tintagel as you walk through the remains of houses built  between the 5th and 7th centuries AD on this remote and beautiful rocky headland. 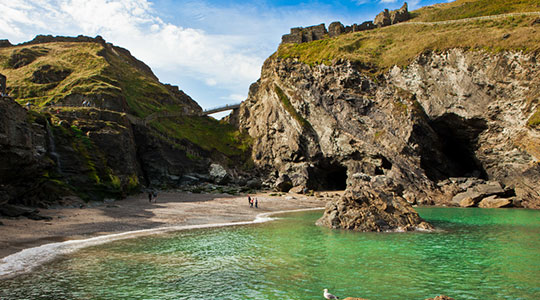 Down on the Beach

Relax on the beach below the castle – one of Tintagel’s best kept secrets – it’s perfect for a quick paddle, or to explore the rock pools.

In winter you can blow away the cobwebs with a walk along the shore or stop and admire the waterfall falling onto the sand from the cliffs above. In summer, children can build sandcastles or explore Merlin’s Cave when the tide is out.

A Taste of Cornwall

With it’s bright and airy decor which reflects the coastal setting, the Beach Cafe is the perfect place for a tasty snack, light lunch or delicious home-made cake.

The ingredients are locally sourced and prepared to order with plenty to choose from, including fish and chips, crab sandwiches and Cornish Rarebit made with Yarg cheese and a local beer. The cream teas are legendary and for children, meals come in a bucket and spade, handy for a trip to the beach later. 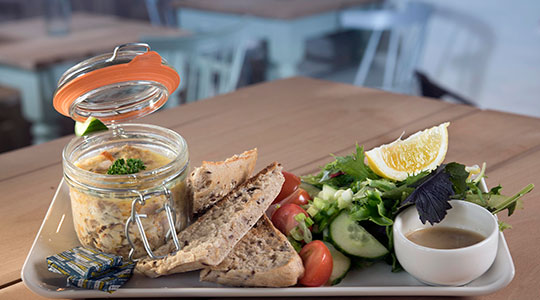 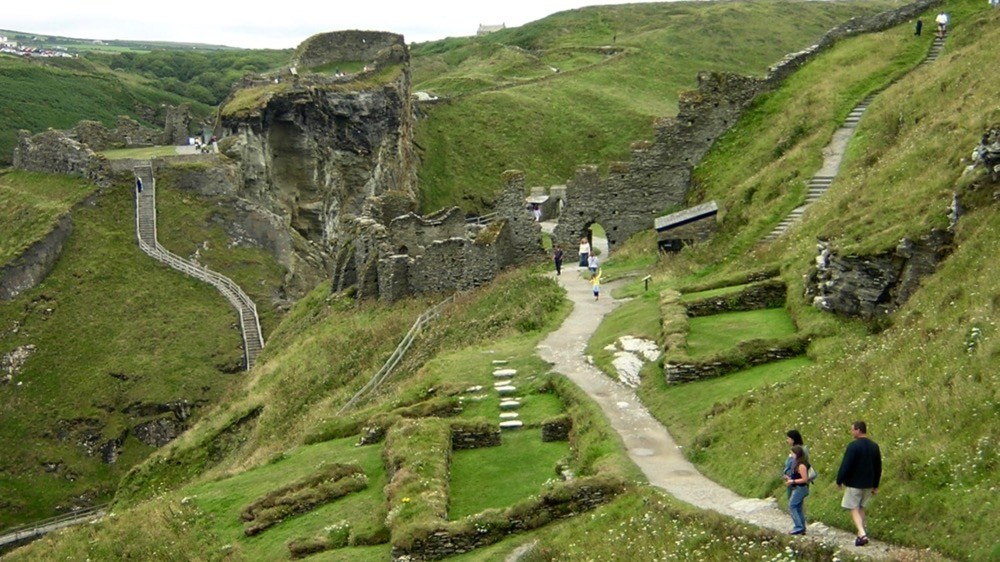 Walk on the Wild Side

Located on part of the South West Coast Path on Cornwall’s north coast between Padstow and Bude, the island is also a Site of Special Scientific Interest (SSSI) and home to plenty of flora, fauna, wildlife and birds through the year.

You can often spot seals in the water, and the cliffs team with coastal birds enjoying shelter from the winds